This Coin may look ordinary but let me assure you , this is a very Rare Error Coin Of British India. To understand how it came into existance lets see the minting process............

Reverse and Obverse side of the coin 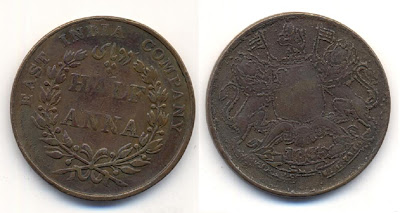 Comparitive Study with a Normal Obverse 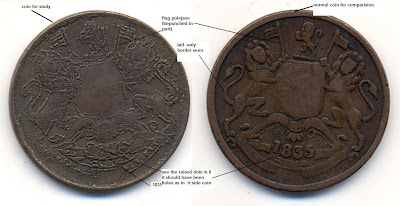 Reverse: Same as any ½ Anna coin and normal.

Obverse: The features of the insignia of the East India Company with date is incused with edges raised and the date reading forward.

To understand how this error coin was minted, understanding of the process of preparation of dies is important:-

1. The first step in producing a coin is the design phase and then the sculptor-engraver prepares a plastilene (modeling wax) model in bas-relief from the approved sketch which is generally between three and twelve times larger than the size of the finished coin. A plaster of Paris negative is then cast from the plastilene model used to incorporate the necessary details and for refining the design. A plaster positive is made after suitable preparation of the negative model.

2. After final approval, another negative is prepared which is used to make a copper electrotype or galvano. After eliminating all defects from the galvano, the engravers add lead to the back to strengthen it. They then mount the completed galvano on a Janvier transfer engraving machine. This machine cuts the design in soft tool steel blank that is the exact size of the finished coin. This produces a positive replica called a hub.

3. A Hub is a positive, or relief (raised) image of the coin which has been impressed into a steel die during the process of creating coin dies. The coin hub itself looks just like a coin die, with the exception of the relief image. It is comprised of a steel shaft with the image of the coin impressed into one end of it. It is during the process of making working dies from the working hubs that many die errors occur.

4. This Master Hub, which bears a positive or relief image of the coin design, is then copied into a select number of Master Dies, (which bear the negative or incuse image of the coin). The Master Dies are then copied, using a special extremely high-pressure "squeezing" process which employs tremendous hydraulic force, to create the numerous Working Hubs (commonly called simply hubs). Since it is a transfer from the ‘Master Hub’ the design appears raised and the inscriptions read forward.

5. Then, from the Working Hubs, the mint creates the Working Dies, (commonly just called dies) where the design appears engraved (cut into), with inscriptions reading backward i.e. in reverse. It becomes exact replica of the master matrix. It is from these working dies that our coins are actually struck.

Opinion of Experts who helped in research for this Coin: -

“This is a genuine minting error. To produce such a coin at the Mint, the Hub (which is used to transfer designs to new Dies) would have to be used in place of one Die”. – Bill Synder (www.worlderrors.com)

"I think that it would have to have been pressed between one Hub and one Die. Good luck for having a variety."

Posted by SravanthiBharat at 10:15 PM No comments: